A trip to the Boston Harbor Islands is an awesome full-day excursion, whether you live locally or are looking to add an extra day to your Salem itinerary.  The Boston Harbor Islands hold unique pieces of Massachusetts, Boston, and American history.  There are 34 islands and peninsulas in this "urban archipelago."  We visited two of them: Spectacle Island and Georges Island, which were extremely different experiences.

9:00 AM
Board the Salem Ferry at Salem Wharf, Blaney Street.  This was the first time we had taken the Ferry since the landside improvements have been completed.  The ferry terminal is still under construction, but the parking lot is paved and lined, and there is an path clearly marked for pedestrians.

Taking the ferry into Boston starts your excursion all that sooner.  There's no traffic, no stress, no parking issues. As soon as you walk down the gangway, your experience has begun. The ferry arrived in Boston at 9:55 AM, and we had enough time to run over to the playground next to Christopher Columbus Park for a few minutes before heading out to Spectacle Island.

10:30 AM
Board the Harbor Island Ferry to Spectacle Island.  We were greeted on Spectacle by a park ranger who welcomed us ashore and gave us a self-guided tour brochure.  We stopped into the visitor center and restrooms before beginning our trek up the large drumlin.  Spectacle has an amazing history.  In the 18th century, it was home to a maritime quarantine station, in the 19th century it held a horse rendering plant, and in the early 20th century it was converted into a garbage processing facility.  In 1992, Spectacle's story took an unexpected turn when the Big Dig / Central Artery project used it as a landfill location, and the sediment excavated from Boston was brought out to Spectacle where it was built up into the island you can see today.

There is a sandy beach, with a lifeguard, interpretive signage, a snack bar and visitor center on Spectacle.  People we rode out with were taking beach and picnic supplies, or were planning to hike and walk around the island's trails.

12:30 PM
We hopped on the inner-island ferry toward Georges Island. Georges is home to Fort Warren, which is a national historic landmark.  Georges Island is commemorating the 150th anniversary of the Civil War this summer, so we were met by reenactors playing Fife and Drum, which set the mood for the day.  As eager as we were to explore the fort, we were hungry, so our first stop on Georges was the Summer Shack snack bar.  After lunch, we started into the Fort to explore.

There are ranger-guided tours throughout the day, but we decided to explore independently and the kids ran in and out of the bastions, observation towers, batteries and casements.  There were reenactors in costume playing music, and the kids
could try their hands at Civil War-era games.

The museum at Georges Island was very impressive, depicting the experiences of various people who were

stationed, or imprisoned, on Georges Island.  One exhibit displayed six plates of food, showing what you would eat if you were at Fort Warren, and it varied drastically between enlisted, officers, or prisoners.

3:30 PM
Time for the Harbor Island Ferry back to Long Wharf in Boston.  By this point in the day there were sailboats
racing in the harbor, as well as all of the tour boats and pleasure cruises out on the water, making Boston Harbor a very exciting place to navigate.

We arrived back in Boston in time to head over to the North End and grab some pizza (our Salem Ferry tickets were good for a 10% discount at several restaurants through Boston's Best Cruises' Cruise & Play program), and a quick stop at Modern Pastry for Canolli to eat on the Salem Ferry trip back.

6:00 PM
We boarded the Salem Ferry to head back to Salem.We had walked for miles, ridden multiple ferries, and had a great day that took us from a modern-day engineering feat to a Civil War fort and back again.  And we would all sleep well that night. 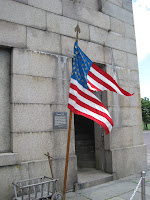 Boston Harbor Islands, BostonHarborIslands.org
Check out their "150 Free Things to Do," which includes everything from yoga to self-guided tours to fishing clinics.

Snack Bars on Spectacle and Georges: Summer Shack, SummerShackRestaurant.com
Many people bring picnics to enjoy on the beach.  We brought our own snacks and water, but stopped for lunch.
Posted by Kate Fox, Destination Salem at 8:00 AM