I just prepared a list of select events happening in Salem this spring, and thought I'd share them with you. Things will start warming up in Salem in April (which is not to say that the current Mahjong: Contemporary Chinese Art from the Sigg Collection exhibit at the PEM is not hot, it is, so come see it. And come to Literally Salem at the end of the month, and take advantage of many opportunities to hear and see some great contemporary writers including Hannah Tinti and Brunonia Barry), and then it's nearly summer, and Salem really shines in Summer.
So, make plans, I say. Mark you calendar and discover the magic of arts, culture, great dining, celebrations and fun - fun - fun in Salem in 2009!
Remember, this is a very short list of events in Salem - visit the calendar at Salem.org for everything that's happening. There's a lot happening. Something for everyone, I daresay.
Special Events in Salem, Massachusetts
April – July 2009

April 4
Sensational India!
This two-day festival will make connections between the rich Indian art and culture represented in the PEM collections and India’s remarkable performing arts — traditional and contemporary — in its many exciting forms. The celebration will include art, dance, music, film, food, hands-on art activities and more. Families activities include tales from India read by storytellers, fortunes told by a parrot and rangoli art projects.
pem.org

April 5-9
Spring Restaurant Week
Take this opportunity to experience Salem’s great dining options! From casual to creative cuisine, and everything in between, Restaurant Week will offer special prix fix pricing at dozens of restaurants.
salem-chamber.org

May 22 (through November 1)
Salem Ferry Opens for the Season!
Considered by many to be the best way to travel between Salem and Boston – this 55 minute ride aboard a high-speed catamaran will transport you along the Massachusetts coastline in climate-controlled comfort! Take advantage of Cruise & Dine and Cruise & Shop specials offered in both Salem and Boston. Free parking at the Blaney Street pier in Salem. The ferry docks at Central Wharf by the New England Aquarium in Boston.
salemferry.com

June 5-7
Salem Arts Festival
Discover the magic of Salem’s arts scene this June! All media will be represented through special events, gallery exhibits, and art installations in Salem.
salemmainstreets.org

June 13 (Through September 7)
Exhibit: The Golden Age of Dutch Seascapes
The Golden Age of Dutch Seascapes, an exhibition of works from the National Maritime Museum, Greenwich, UK, follows the rise of seascape painting from 1550 to 1700.
Through major works by Dutch and Flemish artists, the exhibition explores the major themes of maritime painting, from atmospheric to allegorical and nationalistic imagery. Works by Simon de Vlieger, Hendrick Minderhout and Caspar van Wittel explore methods of employing painting as a means to catalog foreign conquest and trade as the Dutch became a significant presence on the world’s seas.
pem.org 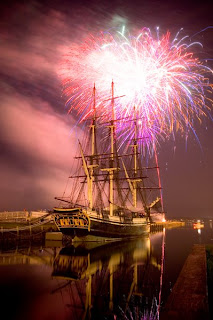 July 4th
Salem Celebrates the 4th!
This is the way Independence Day should be celebrated! Families picnic at the Salem Maritime National Historic Site, games and crafts for kids, a Pops! Concert featuring the 42-piece Hillyer Festival Orchestra, and stunning fireworks over Salem Harbor and the Tall Ship Friendship. Free.
salem.com