We had a great time in Salem in 2010.  Here are my ten highlights from the year.

1.TLC's What Not to Wear came to Salem.  OK, they actually came to Salem in 2009, but the episode aired in January 2010 and has repeated throughout the year.  Stacy London and Clinton Kelly came to  Salem to make over Leanne Marrama, who works at Omen.  The "ambush" was shot at Old Town Hall with the cast of Cry Innocent providing awesome extras and giving a sense of history and place for Salem in this national television show.  The "reveal," when Leanne returned to Salem after the week-long makeover in New York City was held at the Hawthorne Hotel, and her final photos were shot in the gardens at the House of the Seven Gables.  The detail I took away from the shoot? Stacy kept a pair of flats handy because even she knows that running on cobblestones in heels is completely impractical.

3. The Map of True Places, by Brunonia Barry, was released in May, bringing readers to Salem to follow the story of Zee when she returned home to Salem to care for her father and deal with the loss of a patient.  My favorite moment? Zee's father, Finch, selling personal items through the window of his house on Turner Street a'la Hepzebah's Cent Shop in the House of the Seven Gables. 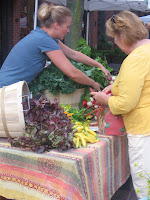 4. The Salem Farmers' Market returned for its second year, and it continued to be cherished by residents and visitors alike.  From the fresh produce to monkey bread to eggs to locally made arts and crafts, the Farmers' Market in Derby Square was a destination each Thursday afternoon that served more than 40,000 customers.  I can't wait for its return in 2011. 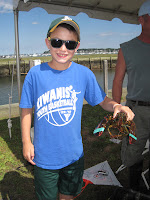 5. The Salem Maritime Festival brought Salem's maritime heritage to life again this year.  Music, crafts, and demonstrations filled the wharves and gave families a day of free family fun on the waterfront. This year the National Park Service enhanced programming by offering free sails on tall ships from the region, the Schooner Fame from Salem and the Schooner Thomas E. Lannon from Gloucester.  We loved making and flying our own kites.

6. The Carrier Family Reunion.  Hundreds of descendants of Martha Carrier, who was condemned in 1692, came to Salem in November with author Kathleen Kent.  The group had lectures, tours, and events that celebrated their heritage, commemorated the Salem Witch Trials, and toured the region.  Kathleen Kent, who wrote The Heretic's Daughter, released her second novel, The Wolves of Andover, in November as well, giving us another opportunity to immerse our minds into the world of 17th century Massachusetts.

7. Diners, Drive-ins and Dives at the Lobster Shanty. If you are not a fan of The Food Network show, Diners Drive-ins and Dives, you probably don't know Guy Fieri and wouldn't recognize his red Camero parked outside the Lobster Shanty this fall.  The Shanty was featured on an episode that highlighted their Lobster Martinis and pulled pork sandwiches.  In case you were wondering, the Shanty is neither a diner or a drive-in.... but it is a local favorite on Artist Row!

8. The Emperor's Private Paradise was the exhibit that put the PEM in the same sentence as the Met.  This fantastic exhibition of artifacts from The Palace Museum in Beijing has given the public its first opportunity to see into an Emperor's private retreat.  The PEM was selected for the exhibit because of the exceptional preservation and interpretation it has done with Yin Yu Tang, the Chinese House that is the only example of 18th century Chinese architecture on display in America.  From Salem, The Emporer's Private Paradise will travel to the Metropolitan Museum of Art in January.

9. Shopping!  Whether we were shopping for jewelry at Treasures over Time, unique home decor at Urban Elements, apparel at Signatures and J.Mode, accessories at Quint Essentials, or gifts to make you laugh at The Beehive, the shopping in Salem has never been better.  Creative, unique gifts can be found from Sophia's to Hex, Salemdipity to the Trolley Depot.  This was the year we went out to Shop Different. Shop Salem.

10. The food.  Have you ever seen so many new restaurants?  We can dine around the world without leaving Washington Street.  From Italian to Polish to American to Mediterranean to Chinese to Thai... the restaurant scene is hopping!  And our favorites like Finz, Victoria Station, Capts, and the Lyceum are still here, offering a steady and strong base for all of the new restaurants.  Restaurant Weeks in April and November gave us the opportunity to dine out for less and experience the new as well as the tried-and-true.


That's 2010 in a nut (mussel?) shell!  My favorites from 220 blog posts and even more events, activities, and places to visit and experience in Salem.  Next year I may have to pick Eleven favorites.  Ten just isn't enough.

Posted by Kate Fox, Destination Salem at 9:27 AM

Email ThisBlogThis!Share to TwitterShare to FacebookShare to Pinterest
Labels: 2010 best