January is Cervical Cancer Awareness month. From January 7th, 2011 to January 15th, 2011 the entire town of Salem, MA will join together to raise awareness for cervical cancer during the first-ever weeklong event, “Painting Salem Yellow.” Throughout the week participating Salem restaurants, businesses, politicians and local celebrities will partner with the “Yellow Umbrella Organization” to empower and educate women about HPV and cervical cancer prevention.
The “Yellow Umbrella Organization” was founded by Salem resident, musician and cervical cancer survivor, Christine Baze, as a means to bring hope and raise awareness for cervical cancer. Since 2002, Christine, with the “Yellow Umbrella Tour” has made over 100 stops across the U.S. and Canada, and now she’s bringing the cause back home with “Painting Salem Yellow.”
Once called “The Next Best Thing to Come Out of Boston” by Boston.com, Christine will be performing seven different shows, sharing her music, story and message with all of Salem. The week will be filled with many fun and educational activities, such as a special assembly at the Salem Academy Charter School, and musical performances by Christine Baze and other Salem musicians including Qwill, Erinn Brown, Christopher Keating and 80’s cover band, Safety. There will also be a “yellow” line through Salem that will guide you to local retailers who are showing their support for “Yellow Umbrella.”
On January 10th, 2011 “Paining Salem Yellow” will kick off with a press conference and luncheon at FINZ Restaurant with a special appearance by Salem Mayor Kim Driscoll, who will be reading a Proclamation for Cervical Cancer Awareness Week, with Baze sharing her music and message. In addition to several musical performances throughout the week, the fun will continue with a very special evening on Tuesday, January 11th, 2011 at the award-winning 62 Restaurant & Wine Bar as they host Yellow Umbrella “Night for the Ladies”, featuring celebrity make-up artist Debra Macki, and Salem’s newest clothing boutique, Glitterati. Chef Antonio Bettencourt is hosting the evening with a special three course “Yellow Umbrella” prix fixe menu and mixing up an exclusive “Yellow” cocktail which will be served throughout the week in honor of “Paint it Yellow!” While Christine performs her original songs, guests can browse Glitterati’s newest yellow fashions, get their makeup done by celebrity make-up artist Debra Macki, and enter to win make-up, accessories and other fun prizes! Please note: 62 Restaurant & Wine Bar’s “Yellow” cocktail will be available for the entire week, while “Yellow” fashions at Glitterati will be on sale for the entire month of January; a portion of the proceeds will benefit Yellow Umbrella.
Schedule of Events 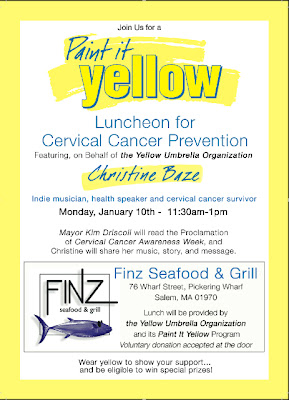 Monday, January 10th, 2011
FINZ Restaurant
11:30AM-1:00PM
Luncheon for Cervical Cancer Prevention with Mayor Kim Driscoll, Christine Baze will be sharing her music and message.
FINZ Restaurant
7:30PM-11:30PM
Girls for the Hooch! with Christine Baze, Erinn Brown, Sarah Seminski, The Dejas, Catfish Lucy, Colleen Connery, and Capper will jump under the umbrella and share their music for the cause.
Tuesday, January 11th, 2011 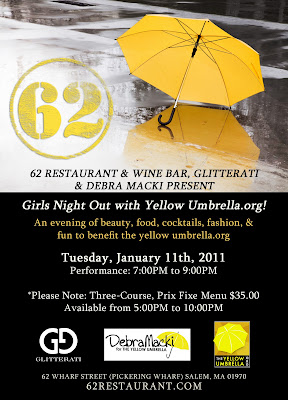