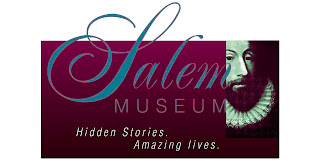 After almost two years of rigorous research and design, the long-anticipated Salem Museum will welcome the public to a Preliminary Opening featuring eight of the eventual thirty themed display panels, a presentation and tour by the Museum Planning Team, and a reception.
The Preliminary Opening will take place on Thursday, April 21, 2011 at 7:30 p.m. at Old Town Hall, 32 Derby Square, Salem, as part of the Old Town Hall Lecture Series. Tickets are $20 general admission, $10 for students, and may be purchased at oldtownhalllectures.com. Tickets will also be available at the door.
“The Salem Museum will be an entry point for visitors -- an overview of Salem history, if you will” says K. David Goss, Museum Project Director and Assistant Professor of History at Gordon College. “Our goal is to heighten people’s awareness of the richness and diversity of Salem’s history through this relatively simple visitor center, and then send them on their way to real sites.” From the museum, visitors will have ready access to Pioneer Village and the play Cry Innocent, both presented by Gordon College’s Institute for Public History.
The Salem Museum will fill the large, colonnade gallery on the first floor of Salem’s historic Old Town Hall. Visitors can take a leisurely stroll through over 400 years of Salem history, starting with Native American settlement, through European settlement in 1626, to the present day. Displays include vibrantly colored text-and-image panels, objects, models, and reproductions.

The display panels visitors can expect to see at the Preliminary Opening on April 21 include:
The remaining twenty-two panels will be unveiled when the completed museum opens on Saturday, June 11, 2011. The Grand Opening will coincide with the 1630 arrival of Governor John Winthrop and the Arbella fleet to Salem, and with the seasonal opening of Pioneer Village.
“This will be a very family friendly museum,” says Ken Harris, artistic director. “We’ve included information about the lives of young people during the past four centuries, and provided fun, interactive activities.” The museum panels will also be available in Spanish translation.
For information on the Old Town Hall Lectures Series: oldtownhalllectures.com
For information on Gordon College’s Institute for Public History: gordon.edu/public-history
Posted by Kate Fox, Destination Salem at 8:00 AM