This is one of those events that will make people say, "Really? In Salem?"  I love that. Because you never know what's going on in Salem - on land or at sea.  The seventh annual Mass Bay Striper Shootout is a perfect example.  (This is the fifth year they've held it in Salem!) 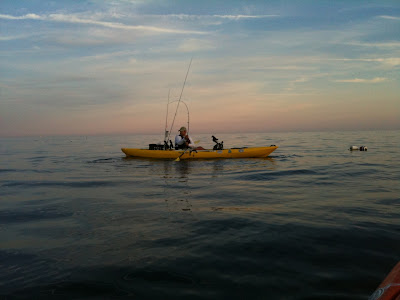 The seventh annual Mass Bay Striper Shootout organized by New England Kayak Fishing rolls in to Salem this weekend. For the 5th year in a row the event will be centered on Winter Island in Salem, Massachusetts on August 19th through the 21st and is catch, photo, and release tournament. There will be close to 150 anglers and their families coming to Salem from as far away as California to participate.

Check in for the event will be in downtown Salem at Joe's Fish Prints at Artists Row.

Most of these kayaks are equipped with electronics including GPS, fish finder units and VHF radios and lights for safety. If you see a parade of tiny lights out on Salem Sound and local harbors, it is fishermen searching for Striped Bass. The winning fish are typically in the 45 inch range. All fish are released.

Proceeds of the event will go to Casting for Recovery, The floating Hospital for Children and the Boys and Girls Club Of Greater Salem.
Posted by Kate Fox, Destination Salem at 2:15 PM

How about a kayak, paddle, flyrod only category? How do you level the playing field with all those electronics? Does everyone have the same gear?