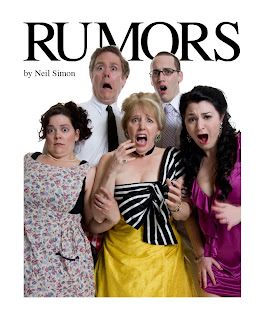 Summer Theatre at Salem State College returns this week with Neil Simon's Rumors. And rumor has it that the show is going to be fantastic! I haven't seen the play (yet!) but I have it on good authority that it's a great date night activity - the comedy has been described to me a classic and slapstick.

Can't have too much comedy, now can we?

In their press release, Salem State College describes the play as "a classic farce, in which several posh couples attend a dinner party only to find the hostess missing and the mayor has been shot - but their biggest concern is their reputations if they are connected to the scene of the crime!"

Summer Theatre at Salem State College is a professional troupe in residence. The second show in the 2009 season is Footloose, which will run on the College's mainstage July 16-26.

Rumors opens this Thursday, June 18, and runs until July 12. Check SalemState.edu/arts for performance times and ticket prices. Rumors is playing in the smaller Callan Theatre, which does sell out, so it is advised to get your tickets in advance.

Grab your discount code from Salem.org/deals to save a bit on your ticket!
Posted by Kate Fox, Destination Salem at 10:04 AM