Salem Maritime National Historic Site is working to repair damage done to Derby Wharf by the severe storms that pummeled Massachusetts on February 25 and March 13-15. “We are committed to maintaining this important historic feature of Salem’s National Park,” said Salem Maritime Superintendent Patricia Trap, “and we understand that Derby Wharf is important to the local community as a place of recreation. We are developing strategies to repair the damage from the last storm, and find long-term solutions to preserve the wharf for future generations.”

The storms exacerbated some existing problems on the wharf -- moving gravelnear the lighthouse, and washing out fill from behind the granite casing stones on the east side of the wharf. In addition, the earlier storm loosened some of the bollards that are used to tie up the tall ship Friendship on the west side of the wharf. The site is getting the funds together to both repair the major damage from the storms and finance an engineering study to try to solve the continuing problems with the loose gravel and stone dust washing out during high tides and storm surges. 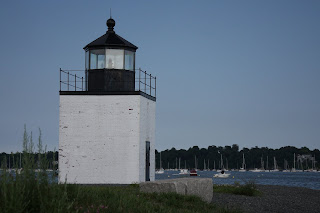 Derby Wharf is the oldest extant wharf in Salem, one of the last survivors of over 50 wharves that once lined the harbor and the rivers during the late 18th and early 19th century. The wharf was begun in 1762 by Capt. Richard Derby, Sr., who at the same time had the brick Derby House built at the head of the wharf as a wedding present for his son, Elias Hasket. For many years during and after the American Revolution, Derby Wharf was the hub of Elias Hasket Derby’s massive trading empire. It was gradually lengthened over the years to hold more warehouses and reach into deeper water, until Elias Hasket Derby’s heirs extended the wharf to its current half-mile length in 1806. The wharf continued to be used for shipping throughout the 19th and early 20th century. In 1937, Derby, Hatch’s, and Central wharves were handed over to the National Park Service to form the nucleus of Salem Maritime National Historic Site.