I was "on location" in Salem with Sarah Cody from CT NOW on Fox 61 yesterday. Here are a few pictures from the day.

We started at the Regional Visitor Center and then walked through the PEM campus to the Salem Witch Museum. Mike, the cameraman, shot b-roll along the way of the Essex Street, Hawthorne Hotel, Roger Conant. 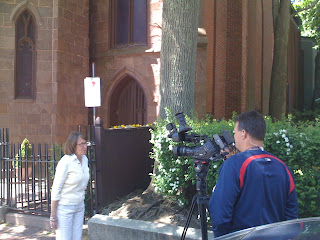 Sarah interviewed Alison D'Amario at the Salem Witch Museum. They had a great discussion about the Witch Trials, what happened in Salem in 1692, and how lessons from the trials are relevant today.

We headed to Pickering Wharf after the Salem Witch Museum, and Mike took some shots of the stores and restaurants. (Note, it was lunch time when we were down there and the restaurants smelled goooood!) 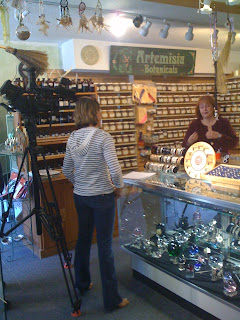 We stopped in at Artemisia Botanicals, where Sarah talked to Teri Kalgren about the shop, about being a witch, and about Salem. I took a few more pictures at Artemisia, which I will post later this week. 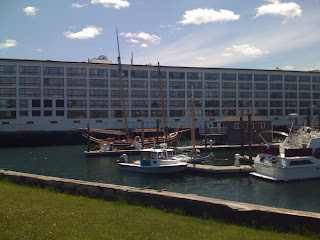 Then we headed over the Central and Derby Wharves and Mike filmed some intro spots with Sarah, with the tall ship Friendship in the background. I took this picture with Schooner Fame in the background because it was the first time I'd seen her with her winter wrap off. (Sails start Memorial Day!) 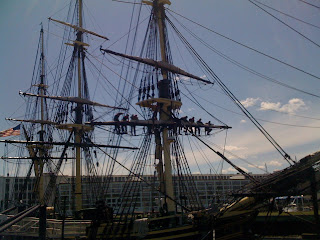 We had great timing at the Salem Maritime National Historic Site, as the riggers were working on the Friendship. What a great day to be hanging from rigging on a tall ship!! 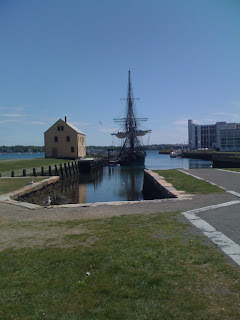 Mike took some shots of the Custom House and Derby Street before we went down to Turner Street and the House of the Seven Gables. The last stop for the day was on Chestnut Street for a few shots of the Federal architecture and stunning streetscape.

I can't wait to see how they boil it down to a two-minute segment! The piece is scheduled to air on Monday, May 17. It will be online after it airs, and I'll be sure to share the link.
Posted by Kate Fox, Destination Salem at 10:43 AM