Images from a Great Day in Salem

Yesterday was Destination Salem's annual Tourism Day. This is an event that brings members of the tourism industry - Concierge, tour operators, destination marketing professionals - to Salem for a day of appreciation and exploration.We had stunning weather. Blue skies, high of 90, and air conditioning during lunch. Our hosts were fantastic, and the group had a wonderful time. 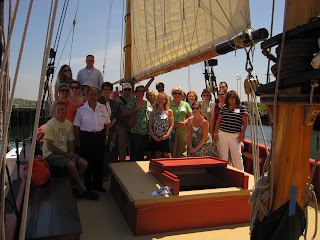 Here's what we did and where we went...We took the Salem Ferry up from Boston (Ferry service between Boston and Salem begins for the season on Friday, May 28! Ticket prices are less this year - $19 Round Trip for adults!), and we were met by two bright red trolleys from Salem Trolley.Trolley driver and tour guide extraordinaire Fran took one group on a trolley tour of Salem, to the Witch Dungeon Museum, and to the Schooner Fame. Trolley two, captained by the fantastic driver Ron, took the rest of our guests to the Salem Witch Museum, the House of the Seven Gables, and on their own trolley tour of Salem. 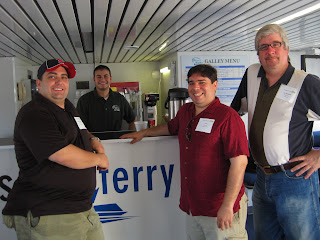 We all met at the Peabody Essex Museum where people could have a guided tour of the new Fiery Pool: Maya and the Mythic Sea exhibit or an overview of PEM highlights.And then there was lunch, which was so delicious! The Lyceum, Caffe Graziani, Finz, Capt.'s, Sixty2 on Wharf, Nathaniel's at the Hawthorne Hotel, Coffee Time Bake Shop, and Woodman's of Essex provided incredible samples of their menus. From salad to gazpacho to chowder to real cream Bizmarks... nobody left lunch hungry! 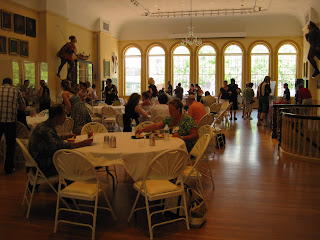 We ate lunch in the beautiful East India Marine Hall, which had a cameo in the film Bride Wars. In the Bride Wars scene, Kate Hudson and Anne Hathaway quip, "But it isn't the Plaza..." Well, no, it isn't... it's the PEM, which I think is much more interesting. 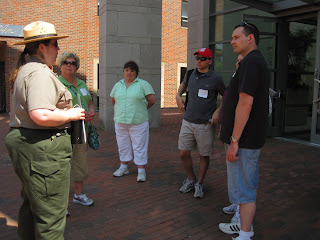 After lunch, the group was split into four and they headed off on walking tours (Kudos to the guides and guided - it was hot out there. Very hot.) Ranger Emily Murphy from the Salem Maritime National Historic Site took a group off to learn about Maritime Heritage, Julie Arrison of Historic New England's Phillips House led some to the McIntire District to discuss architectural heritage, Spellbound Tours led a group through Salem's haunted history, and Hannah Diozzi from Salem Strolls took a group through Salem's downtown shopping and dining districts. 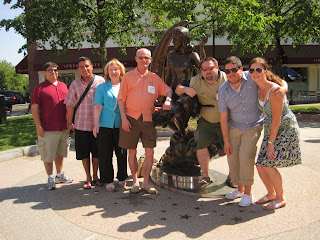 We ended the day with cool refreshments and complimentary psychic readings provided by psychics from Hex and Omen aboard the Salem Ferry back to Boston. 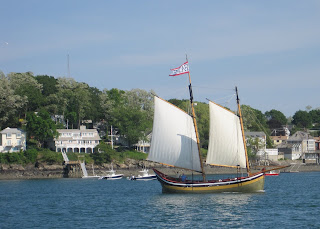 It was a great day - and a good example of just how much you can fit into one very busy day of exploration in Salem.
Posted by Kate Fox, Destination Salem at 10:33 AM