Before I mention the special event at Yoga Sakti that is planned for February 11, let me mention that ALL classes at Yoga Sakti are $5 during the month of February.  If you haven't tried Yoga Sakti yet, now is the time. 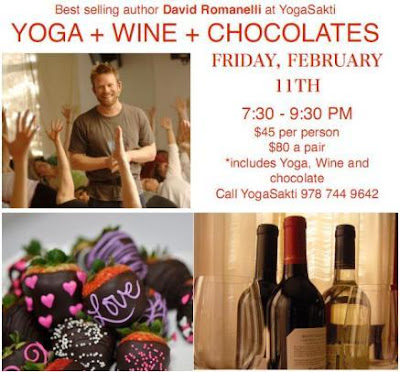 “Some experiences which are crucial to our maturity cannot be sped up, and are only possible if they occur slowly.”  -- Carlos Petrini
Imagine a night of music, yoga, laughter, exotic chocolate, ﬁne wine, and a simple reminder that life is short, we best slow down and savor it. After a 90 minute ﬂowing vinyasa yoga class set to great tunes (from Sinatra to Sublime), yoga teacher and bestselling author David Romanelli will lead you on a guided tasting of exotic Vosges chocolate and ﬁne wine. You will recognize that in a post yoga state of mind, not only are you more in touch with the subtleties of a trufﬂe with 12 year old Balsamic vinegar and a glass of Zinfandel, but also the subtleties of the mind, body, and soul.
Since 2004, Yahoo! Wellness Expert David Romanelli has been traveling the world sharing his Yoga for Foodies, Yoga + Chocolate, and Yoga + Wine experiences. The purists have been known to challenge his blending of ancient tradition with modern tastes, sounds, and passions. But those who prefer their yoga coated in chocolate, seasoned with humor, and lavished with Marley have enjoyed his workshops and debut book, Yeah Dave's Guide to Livin' the Moment: Getting to Ecstasy through Wine, Chocolate, and Your Ipod Playlist. David will be featured in the March 2011 issue of Food + Wine Magazine. His work has also been in The New York Times, Newsweek, and Oprah Magazine and his book reached #1 on the Amazon Self-Help Bestseller List. David was co-founder of At One Yoga in Scottsdale, AZ.
Posted by Kate Fox, Destination Salem at 1:05 PM