Improving upon "The Witch City"

An article from the July 30, 1925 edition of The Salem News found its way onto my desk last week, and I have to share it.  You may have noticed that we have launched a new logo and tag line for Salem this year - officially declaring that Salem is Still Making History.

We spent months in meetings working to find the best graphic and slogan for a city that has such a breadth of assets, a wealth of history, and a very eclectic nature.  It would seem, from this 1925 article, that our quest for the perfect trademark predates us all.


It is hard to read, so I've typed the content of the story: 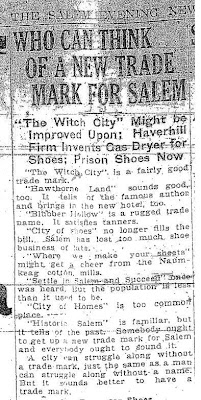 WHO CAN THINK OF A NEW TRADE MARK FOR SALEM

"The Witch City" Might be improved upon...
"The Witch City is a fairly good trade mark.
"Hawthorne Land" sounds good, too. It tells of the famous author and brings in the new hotel, too.
"Blubber Hollow" is a rugged trade name. It satisfies tanners.
"City of shoes" no longer fills the bill. Salem has lost too much shoe business of late.
"Where we make your sheets" might get a cheer from the Naumkeag cotton mills.
"Settle in Salem and Succeed" once was heard. But the population is less than it used to be.
"City of Homes" is too commonplace.
"Historic Salem" is familiar, but it tells of the past. Somebody ought to get up a new trade mark for Salem and everybody ought to sound it.
A city can struggle along without a trade mark, just the same as a man can struggle along without a name. But it sounds better to have a trade mark.

You can still find information on Salem's tannery history and blubber hollow and the Naukeag Mills (now Shetland Properties) on some of Salem's walking tours and at the National Park Service.

I'm happy to say that more and more people do "settle in Salem and succeed," which is testament to our great downtown and the wonderful shop, dine, explore, live, play atmosphere that has been fostered in Salem by people, organizations and businesses that are invested in the success of Salem.
Posted by Kate Fox, Destination Salem at 9:00 AM

We also have some info on the tanning industry in Salem at the Leatherworkers Museum in Peabody. :)

I really like how the Witch Hat and Sailboat are one.. Very cool,