The newest way to see Salem

Since arriving in Salem last October, Jeff and Brad at Witch City Segway have been inviting me to try a Segway, come on a tour, check it out.  I finally got there today for a tour, and - oh, my goodness - THIS is a great way to see Salem! 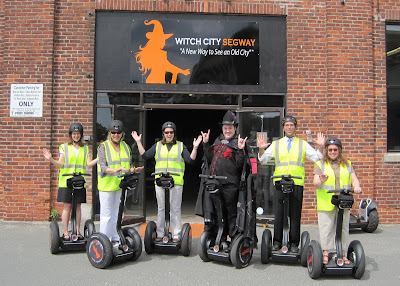 Six of us descended upon Witch City Segway's store front / training facility to take their 10:00 AM tour today.  We started with a brief introduction to how Segways work (they are intuitive), how to lean our bodies forward and back to move forward and backwards, how to turn, how to stop. We received a primer on Segway safety (No texting, no phone calls, no reading, no applying of make-up... a list that we learned continues to grow as people engage in unsafe behavior while atop the wheels).

And then we were off.


Beginning at Witch City Segway on Derby Street, we zipped along to Salem Maritime, the National Park in Salem, where Jeff talked briefly about the maritime heritage, privateers, and Nathaniel Hawthorne.  We then rolled down to Turner Street, where we talked a bit about the House of the Seven Gables, Salem harbor and Shetland properties, which occupies a large portion of the landscape with its distinctive roof line.


From Turner Street we got to "open them up" and go the full 12 MPH as we headed out past Smith Pool to Winter Island Maritime Park.  We explored Winter Island, stopping at the highest elevation to enjoy the view and then heading over to Pickering Light for a photo opp.  From Winter Island we rode over to Salem Willows, passing the arcade and food stands, talking about the fabulous popcorn and Chop Suey sandwiches, and then stopping by the fishing pier for a few more pictures.

From Salem Willows we headed back toward town, riding along Collins Cove and then across Salem Common.  The tour talks about the Salem Witch Trials on Salem Common, and during this (and each) interpretive break participants are able to step off their Segway and stretch their legs a bit.


From Salem Common we rode down Essex Street and over to the Old Burying Point on Charter Street and the Witch Trials Memorial.  Our tour ran out of time at this point, but the two-hour tour would go over to the old jail on St. Peter's Street, the Witch House, and down Chestnut Street before returning to the storefront on Derby Street.

Because the tour size is so small (limited to six, minimum age 14, minimum weight 100 lbs), Jeff and Brad are able to customize the tour to your interests. They are great hosts and guides, and I'm pretty sure they were having as much fun out there as we were.

Visit Witch City Segway at 283 Derby Street (behind Brothers' Deli) to for a most memorable view and tour of Salem.  They encourage you to book online at WitchCitySegway.com, and tours do sell out so buying tickets in advance is wise.

Hi - I am visiting Salem with my family this year. Where is a good place to stay with kids? Ages 3 and 5. I am at kristin@cbusmom.com. Thanks!

Here’s our link to accommodations: http://www.salem.org/visit/index.php?grp_ID=1

Of the accommodations listed, Salem Waterfront Hotel has an indoor pool, Salem Inn has family suites, and the Northey Street House B&B has family-friendly rooms, as well. All are within walking distance of the visitor center and downtown attractions.