Salem named on of the nation's 10 best neighborhoods! 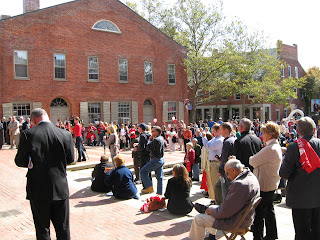 This is very cool, and I've excerpted it directly from Mayor Kimberley Driscoll's FYI Salem.

The American Planning Association (APA) announced that Downtown Salem has been designated one of 10 Great Neighborhoods for 2008 through APA's Great Places in America program. APA Great Places exemplify exceptional character and communities of lasting value. APA singled out Downtown Salem for its historical character; redevelopment as a compact neighborhood with residential, retail, and commercial uses; and for helping boost Salem’s local economy.
To celebrate, the City hosted a

neighborhood block party celebration for downtown residents, work-ers and visitors to attend on Wednesday, October 8th at Noon at Derby Square in front of Old Town Hall. Mayor Kimberley Driscoll along with U.S. Senator John Kerry, U.S. Representative John Tierney, State Representative John Keenan, Massachusetts Secretary of Housing and Economic Development Daniel O’Connell, and other City Officials were on hand to participate as we celebrated this very special announcement in down-town Salem!
The City of Salem is extremely excited and honored by this designation. Over the last few years, the downtown has been transformed with a lively mix of retail and