Reign of Terror: The Salem Murder of 1830 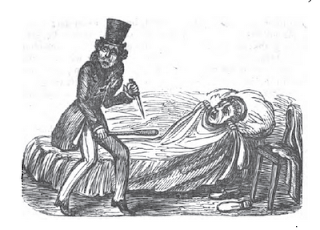 I don't know if it's appropriate to say the story of the White Murder is one of Salem's best stories, but it is a great tale of intrigue. Learn about it yourself at Cornerstone Books on Tuesday night.

180 years ago, on the night of April 6, 1830, in the quiet seaport of Salem, Capt. Joseph White, 82, one of the wealthiest men in America, was killed in his house on Essex Street. Nothing had been stolen, and there seemed to be no motive for the crime. For several weeks, experienced a reign of terror: the killer or killers remained at large, despite the efforts of a “Committee of Vigilance” that tried to hunt them down. White’s nephew and chief heir, State Sen. Stephen White, was framed for the murder, but at last the true killer and his employers were identified, and the whole nation was shocked at the revelations.

Come to the meeting of the Salem History Society at Cornerstone Books, 45 Lafayette St., Salem, on Tuesday evening, April 13, 7:30-9 PM, for an illustrated talk by historian and discussion about The White Murder and what it meant to Salem—in 1820 America’s richest place, per capita, and 8th-largest population center, but by 1830 a town in which crime flourished and a flagging maritime commerce had tragic consequences worldwide.

Posted by Kate Fox, Destination Salem at 9:39 AM