July Fourth in Salem is a fantastic celebration of all things patriotic. 2010 marks the eleventh year that Salem's celebration of the Fourth will be led by Conductor Dirk Hillyer and the Hillyer Festival Orchestra on Derby Wharf at the Salem Maritime National Historic Site.

This year the musical celebration will celebrate "Rising Stars" and feature:

And, of course, the orchestra will perform patriotic favorites while the fireworks explode above the tall ship Friendship, Derby Wharf, and Salem Harbor. 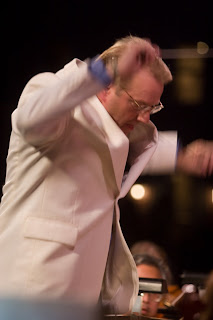 The man behind the program, and in front of the orchestra, is the very talented Dirk Hillyer. You may have seen him performing in the band for Salem Theatre Company's recent production o Hair, or at one of the HFO's many other regional events.

In anticipation of another wonderful 4th of July in Salem, here is how Dirk Hillyer sees Salem.

Where are you from?
Portland, Oregon

How long have you worked in Salem?
25 Years

Your Top Five: What or where do you recommend to guests from out of town?
Go to Salem Beer Works and the Salem Witch Museum.

Describe Salem in ten words or less:
A happenings city that is rising to terrific regional prominence, especially in the arts, such as July 4th, Salem Film Festival, Salem Theatre Company.

* * *
If you want to dine and explore like Dirk, here are the links to all of the places he recommends:
Dine
In a Pig's Eye
Finz
Victoria Station
Strega
Salem Beer Works

To learn more about the Hillyer Festival Orchestra, visit HillyerFestivalOrchestra.com.