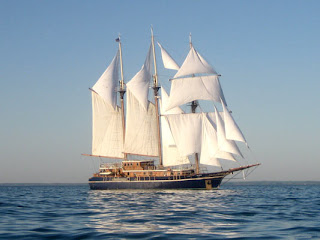 From August 9 to the 22nd, Salem Maritime will welcome the 400 ton barquentine Peacemaker to historic Central Wharf. “We are committed to having a lively visiting vessel program at Salem Maritime National Historic Site,” said site Superintendent Patricia Trap, “and Peacemaker is a modern example of the traditional shipbuilder’s art.”

Peacemaker originally built in 1989 in Brazil and intended as a charter vessel by a Brazilian industrialist. She was never completed, however, and in 2000, she was purchased by a community known as the Twelve Tribes. The Twelve Tribes community finished construction on the vessel, rigged her as a barquentine, and in 2007 began sailing her as an experiment in communal living at sea.