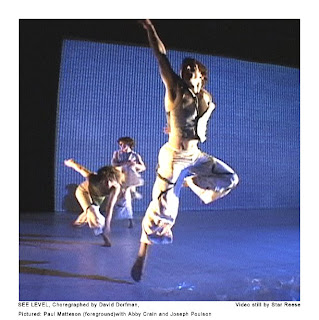 "One of the great pleasures of watching dance in New York over the past decade or so has been seeing the growth of David Dorfman from accomplished to inspired modern-dance choreographer." - Jennifer Dunning, The New York Times, 2004
David Dorfman Dance will bring its exuberant, gorgeous and delightfully oddball style to Salem State College on Thursday, January 29 at 7:30 in the Mainstage Theatre, 352 Lafayette Street.
Founded in 1985 the company is noted for its unique voice and creative collaborations with contemporary composers and visual artists. David Dorfman is the recipient of a 2005 Guggenheim Fellowship, four fellowships from the National Endowment for the Arts, an American Choreographer’s Award and the first Paul Taylor Fellowship. The Company is equally honored with eight New York Dance and Performance Awards, "Bessies."
Among the pieces that David Dorfman Dance will perform at Salem State
is Disavowal which premiered in fall 2008. Disavowal, inspired by the
life of abolitionist and (in)famous "race traitor" John Brown, is an examination of white supremacy, racism, alienation and control. Through dance-theater, Dorfman looks at the relationship between militancy and conviction, asking: What will we give up or push away in order to get closer to/fight for something else?
David Dorfman Dance appears with the support of Salem State College’s Center for the Creative and Performing Arts. Tickets: $20 general; $15 seniors and non-SSC students; $10 under 18.
For additional information or to purchase tickets call: 978-542-6290 or visit: http://www.blogger.com/www.salemstate.edu/arts.
Posted by Kate Fox, Destination Salem at 4:35 PM