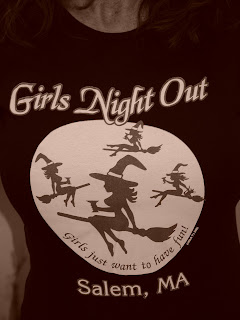 Two things for you today:
First... Thanks to the blog reader from Arizona who wrote in looking for the "Girls Night Out" tee. That t -shirt is wildly popular, and is available from Witch Tees in Museum Place Mall. It is the second in my series of Salem Gifts to Get & Give (to recap: Gift #1 was the "Good Witch/Bad Witch T from The Trolley Depot). Stop in to Witch Tees and let them know I told you you just had to have the Girl's Night Out T.
Second... I had the opportunity to take a Hocus Pocus Tour last week, and it was fantastic! These are ordinarily night tours, but company owner Susan Metzger was wonderfully accommodating for two travel writers we had in town from the UK, and she led the tour mid-day. This tour is chocked full of tidbits the darker side of Salem history. It is not a ghost tour or a haunted tour - it is a historic tour... and after taking it, you may understand why people come to Salem seeking paranormal activity. There are some really dark patches in Salem's history!
Susan told us about the Witch Trials of 1692, of course, and she told a few tales of murders and burials, famous inmates in the Old Salem Jail - and why the jail was ultimately condemned in 1991. The tour also included historic and architectural information.
Hocus Pocus Tours run nightly. Visit http://www.hocuspocustours.com/ or call 781.248.2031 for details.
Posted by Kate Fox, Destination Salem at 9:01 AM

You know, I have been to Salem many times and have never been on that tour. I tend to get my "witch" history from movies. :)