Pirates Take Salem State College by Storm In Gilbert and Sullivan’s The Pirates of Penzance! 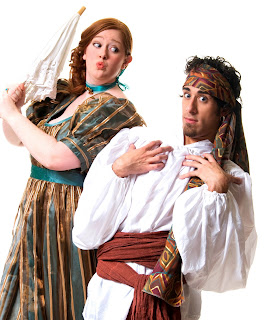 Arrrgggh, Matey! Save some gold when you purchase tickets to Pirates of Penzance by getting the coupon code from Salem.org/deals (bottom of the page under "theater & entertainment"!)!!

Everybody loves a good pirate story – especially when it is filled with silliness, adventure and a lively song or two. Salem State College’s award-winning theatre department adds its own unique ingredients to this formula with its production of “The Pirates of Penzance”, running April 16-26 in the College’s Mainstage Theatre.

“ Pirates is one of the most popular comic operas ever written,” according to Celena Sky April who shares directing duties with colleague David Allen George. “When people hear the word opera they might think boring. Pirates is anything but that! Gilbert and Sullivan made some outrageous comments about Victorian society hidden behind wild antics and terrific music.”

Audiences will be led through a rollicking adventure as the hero and heroine of the story try to find true love. The adventure includes a Major General who knows nothing about military strategy, bumbling police, a chorus of beautiful sisters and two surprises that lead everyone to a happy ending. And did we mention the pirates are always lost?

This production is music directed by Mark Morgan, Artistic Director of Light Opera (NELO). Morgan and members of NELO have been in residence this academic year, teaching Gilbert and Sullivan’s unique musical style to music and theatre students. Morgan’s take on Pirates: “Think the Monty Python of the 19th century!”