Salem State, World History Association bring educators,
world scholars together in a fitting place – Salem
June 25 – 28, 2009
SALEM -- Expected to attract nearly 300 scholars from around the world, Salem State, in partnership with the City of Salem, will host the 18th annual World History Association (WHA) Conference from Thursday, June 25 through Sunday, June 28.Previous locations for the prestigious gathering of world scholars have included Morocco and Queen Mary College in London. 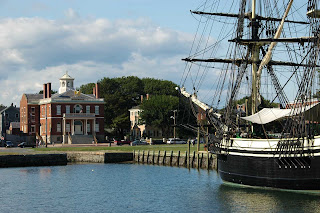 Focused on the theme Merchants and Missionaries: Trade and Religion in World History, the conference workshops, some of which are free and open to the public, will take place on the Salem State campus as well as at several other locations, including downtown Salem, at nearby Endicott and Gordon colleges, and in Boston.

The WHA announced that it chose Salem State as this year’s conference host due to the college’s strong history and international programs, and for its location in the historically-rich city of Salem.

“Once at the forefront of our country’s evolution, Salem welcomes the opportunity to return to its role as the center of activity,” said Salem Mayor Kimberley Driscoll, a 1989 graduate of Salem State. “Our city played a prominent role as the trade center of the western world during the early years of our nation, and we stand prepared to play the distinctive role of host of the World History Association’s annual conference focusing on merchants, missionaries, trade and religion.”


“This puts Salem on the world map for reasons beyond the witch trials,” said Salem State history professor Chris Mauriello, an organizer of the conference that will bring world-renown historians to the city.

“It’s an opportunity for Salem to be observed for its true historical value, as a rich maritime trade port,” pointed out Anthony Guerriero, president of the college’s alumni association which contributed $2,000 for the conference to include transportation to and from the USS Constitution in Boston.

The trip to the USS Constitution is one of several organized visits to historical sites that will feature Salem State College students as tour guides. Other tour-guided visits will be made to the House of Seven Gables, the Salem Maritime National Historic Site, the Peabody Essex Museum, the Salem Athenaeum, and the Stephen Phillips House.

“The conference's keynote addresses, papers, panels, roundtables and workshops will range from antiquity to the present, and will span a wide variety of cultures as they address these broad topics,” said Alfred J. Andrea, vice president of the WHA.

K-12 educators can register for any of the many workshops and earn PDPs to keep their licenses current.

For a schedule of events, visit thewha.org

Photo caption: The Salem Maritime National Historic Site on Derby Street will be one of the many destinations for attendees of the World History Association's annual conference in June.
Posted by Kate Fox, Destination Salem at 9:57 AM