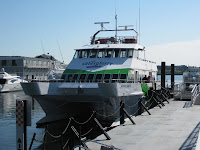 Destination Salem hosted Tourism Industry Day in Salem yesterday, and we had a blast! Here's a snapshot of our day -

9:00 AM, the Salem Ferry departed Long Wharf North in Boston. Note the new location of the Ferry, because we were all at Central Wharf next to the Aquarium wondering, "where's the boat?!" - it was on the other side of the Marriott Long Wharf, adjacent to the lovely Christopher Columbus Park. The new dock in Boston is really easy and convenient. Just don't look for the ferry at Central Wharf! 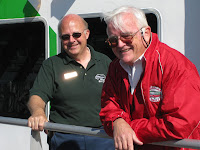 10:00 AM, arrival in Salem and a warm welcome from Representative John Keenan. Everyone hopped on trolleys, and we were off!

We visited the Salem Witch Museum, Witch Dungeon Museum, Peabody Essex Museum, and House of the Seven Gables - using the trolleys to connect to each site, and taking in highlights of Salem along the way... Chestnut Street, Salem Common, Salem Willows, Pickering Wharf... all places to return to later, on foot, when there is time for 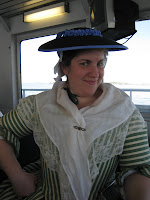 We had snacks and water on the trolleys, which was a good thing because lunch wasn't until nearly 2pm!
BUT, lunch was served on the lawn at the House of the Seven Gables. Can you say stunning? Salem native and author Brunonia Barry spoke to the group, and a delicious lunch was provided by the following restaurants:
- Brother's
- Caffe Graziani
- Capt's
- Cilantro
- Coffee Time Bake Shop 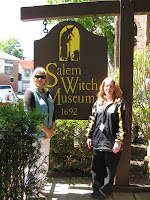 - Finz
- Nathaniel's at the Hawthorne Hotel
- Rockafellas
- Sixty2 on Wharf
- Upper Crust
We called lunch "Salem Bites!" and it was appropriate! The nibbles were delicious.
After lunch, the group was set loose on Salem for a scavenger hunt that encouraged them to run around the streets and see just how walkable Salem is! For anyone who isn't being driven by the tourism day schedule, I would call after lunch "time to shop!" 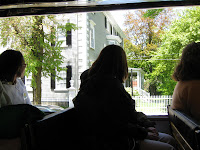 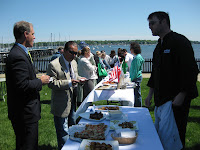 And they did all of this in about 60 minutes (impressive, right?!). One of the concierge on the tour commented that they didn't realize the diversity of shops in Salem, and the scavenger hunt was a great way to get them in and out... and now they want to come back again and again.
And don't think I didn't notice the concierge who wasn't the scavenger hunt type - he had a lovely afternoon respite in one of Salem's watering holes! (This goes to show that there's something for everyone in Salem!)
Salem Trolley and CityView Trolley provided excellent transportation and tours throughout the City. Including a last minute double-back for a scavenger hunt team 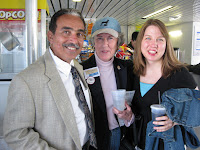 We took the 4pm Ferry back to Boston, arriving just after 5pm... exhausted and delighted by a lovely day in Salem!
To see more pictures of Tourism Day in Salem, visit the Destination Salem page on Facebook!
Posted by Kate Fox, Destination Salem at 10:25 AM

I forgot to mention Caffe Graziani and their incredible Bruschetta - they were also a part of the Salem Bites luncheon. My apologies for the omission (which has been fixed).