Here are two more of the old postcards I have. These are of two buildings that no longer stand. 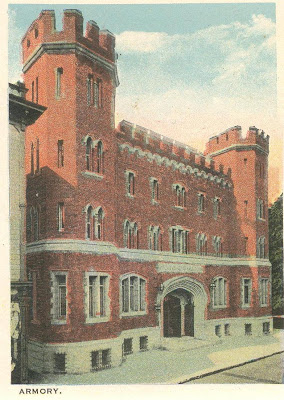 The Armory was located on Essex Street at Liberty Street. The Salem Regional Visitor Center stands in the back of the former armory, and Armory Park is in the Armory's location. The Armory was destroyed by fire in 1982. For more information on the Armory, visit the Salem Maritime National Historic Site's web site at http://www.nps.gov/sama/planyourvisit/upload/Armory2.pdf. 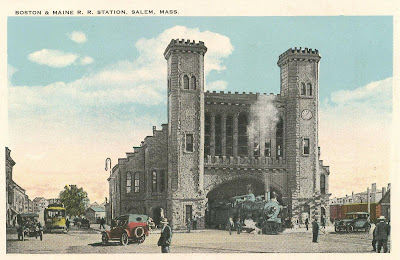 This is the old train station, which was located in the area now known as Riley Plaza at the intersection of Washington and Derby Streets. The station connected Salem to both Boston and Maine. Today the trains from Boston go underground, directly beneath Washington Street (if you're dining in a Washington Street restaurant, you can feel the trains pass below) to the Salem depot.
Salem is an easy 5 stops - 30 minutes - north of Boston on the Newburyport and Rockport lines of the MBTA Commuter Rail. www.mbta.com.

Posted by Kate Fox, Destination Salem at 8:54 AM