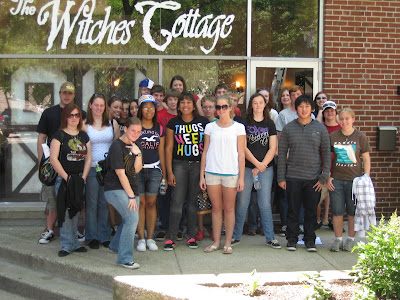 Last Friday I sat in on a performance at The Witches Cottage at The Griffen Theatre. It turns out the show I was "crashing" was being done for a group from Virginia Beach. The group - high school students on a band trip (pictured at the left) - was spending a full day in Salem, and they were loving it.
Their itinerary included:
- The Witch Dungeon Museum
- The Witches Cottage at the Griffen Theatre
- The House of the Seven Gables
- Lunch at Reds
- Time to shop and explore on their own (about 2 hours)
The group was certainly delighted by the show at the Witches Cottage, which included 2 parts: First there was a 1-man show (although I swear there were more actors involved then just Paul, which may be testament to his ability as an actor) that presented a couple of stories from the Salem Witch Trials, a ghost story from Gloucester's Dogtown area, and a story about a paranormal encounter that Paul, the actor, had at a nearby location that is not open to the public, and is not in Salem, so I'm not providing more then "a nearby location."
After the show, director Eric Rodenhiser came onto the stage for about 30 minutes of "talk back" interaction with the audience. Members of the audience were brought on stage to demonstrate different forms of torture and behavior that were used in 17th century Salem society, and Eric talked about witches and the myths and realities of witches.
The show was very creative, and it definitely catered to the 16 to 18-year-old sense of humor. The theatre is small - seating for about 80 - and if you book a private show, the cast has the ability to customize the show a bit to fit your needs. The show is also done nightly beginning Jun 5.
The flyer for the Witches Cottage invites you to "Experience Salem's supernatural side at The Witches Cottage Witchcraft and Ghost Show."
The Witches Cottage, paired with the Witch Dungeon and Salem's other museums and sites, creates a great itinerary that is filled with fun and history that will appeal to groups both large and small.
This group from Virginia Beach was staying in the Greater Boston region and doing day trips. If you have a group that would rather stay in Salem - check out The Hawthorne Hotel, the Salem Waterfront Hotel & Suites, or the Salem Inn.
Posted by Kate Fox, Destination Salem at 12:53 PM

It's funny, I have been there so many times and never did the "tourist" thing...