Pillage the Village this Weekend!

Pioneer Village at Forest River Park will be overrun by a notorious bunch of sea-robbers this weekend, July 24-25! 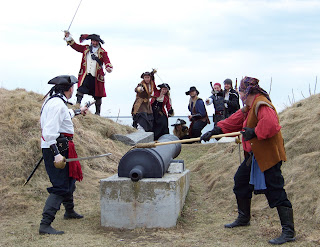 “Pillage the Village: Pirates Invade Salem!” is a special event for the entire family that will feature a treasure hunt, period music, sword fights and more. Guests can wear pirate finery for adult and children’s costume contests, bring a picnic for the day, or join a pirate crew while witnessing the chaos of the Salem village under ‘attack.’

amous pirates from New England’s past to life. The village will be crawling with characters including Captain Ned Low, “Black Sam” Bellamy and even Lynn’s Rachel Wall, who was the last woman hanged on Boston Common.

Here are the details you need to know for an excellent day of Piracy at Pioneer Village:

Admission: $10 Adults, $8 students, seniors, and military, $6 for children 4-12 . All proceeds will go toward the continuing restoration of the Village.

Pioneer Village is America’s oldest living history museum, built for the 300th anniversary of the founding of Massachusetts in 1930. It features thatched cottages, the colonial governor’s “Fayre House,” and even an English-style “wigwam.” Interpretation at the Village is provided by the Institute for Public History at Gordon College, which also produces Cry Innocent!

Arrrrh!
Posted by Kate Fox, Destination Salem at 8:52 AM